Out and about in “Our City!” – Ottakring 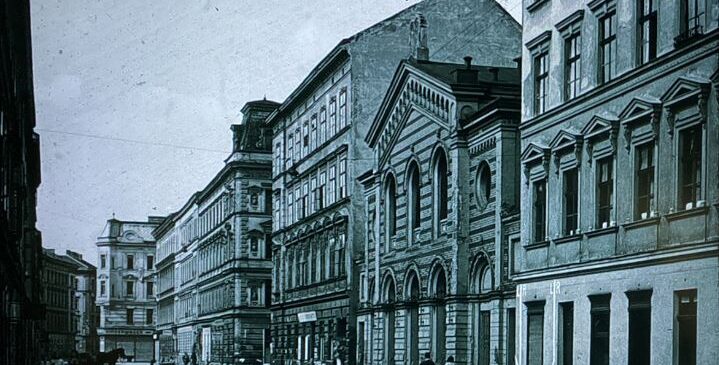 Researching the collection of the Jewish Museum Vienna is like a taking a stroll through Viennese and Austrian Jewish history, going from Vienna out into the world, as well as into Vienna’s 16th district. At the beginning of the 1870s, the then-independent “Israelitische Cultusgemeinde Hernals, Ottakring und Neulerchenfeld” (“Jewish Community of Hernals, Ottakring and Neulerchenfeld”) founded a temple building association headed by Ignaz Kuffner. In 1882, Ignaz Kuffner provided this association with a piece of property at Hubergasse 8, surrounded by two residential buildings. In 1885, the architect Ludwig Tischler, known for his Neo-Renaissance buildings, was won over to plan a synagogue.

This Torah meïl was donated to this community by Ignaz and Rosalie Kuffner in 1860/61; the Hebrew inscription names the “famous and revered Chief Rabbi Jizchak, the son of Chief Rabbi Kopl,” in whose memory the meïl was made. In 1935, the textile was donated by the board of directors of the Jewish Community of Vienna to the collection of the Old Jewish Museum Vienna. After the museum was closed in May 1938, the meïl, labeled as “Torah Meïl Cover No. 5239 A4,” was kept at the Museum of Ethnology. The dedication inscription shows an interesting misspelling: the letter “he” (ה) was always embroidered as “het” (ח‎).

The plans for the “Hotel Metropole,” which opened in 1873 – a Ringstrasse hotel that everyone referred to as the “Jewish” Sacher – also originated from Ludwig Tischler’s hand. The interior and the décor were inspired by the famous Hotel Sacher. Because of its proximity to Vienna’s second district, numerous Jewish weddings and bar mitzvah celebrations took place there. As a result of his collaboration with two large construction companies, Ludwig Tischler was one of the busiest architects of his day, with 28 buildings in the inner city, 79 in the urban expansion areas, and 142 in the suburbs of the time.

This Torah meïl also comes from the synagogue in Hubergasse. The cream-colored fabric indicates that it was intended for use during the high Jewish holidays in autumn – from New Year to Simchat Torah. The Hebrew inscription reads: “This is a gift to the glory of God and His Torah from Schlomo Weizmann and Jesajahu Neumann, the leader of the synagogue and the community of Vienna, 16th district, and may His memory rise (be great) in the year 681 according to the Minor Era.” With the dimensions of 76 x 42 cm, it is almost as big as the meïl donated in 1860/61, which measures 80 x 46 cm.

Apropos Ottakring: In Viennese dialect, “16er-Blech” (“16er-tin”) means a can of Ottakringer beer, especially when ordering it from a sausage stand. Ignaz Kuffner, born in Břeclav (Lundenburg) in 1822, moved to Vienna in 1849 and bought a small brewery with his cousin Jakob. On the one hand, technical innovations enabled production to be increased; on the other hand, the Kuffners also introduced social measures such as vacation pay and established a canteen. From 1869 on, Ignaz served three times as the district mayor. His son Moritz was interested in mathematics and astronomy. He founded the Kuffner Observatory, a teaching and research institute that was Aryanized in 1938. The Observatory has been open to the public again since 1947.